There is a subtle but significant difference between sound and noise.

Sound is classified as being the vibrations that travel through the air as an audible wave of pressure, or another medium. It can be recognised by a person or animal. Or, to put it simply, sound is something that can be heard.

Noise, on the other hand, can be classified as being ‘bad’ or ‘unwanted’ sound. Think a colleague’s phone going off every five seconds when you have a report to write. Or your neighbour’s television being turned up to eleven when you’re trying to get some well-deserved sleep.

Anyone who has worked in an office will have experienced noise in some form, which is why acoustic design has become such a hot topic in recent years. There’s no point designing an aesthetically perfect workspace if, acoustically, it’s an uninhabitable or unproductive environment to be in.

But if you’re designing a space – or just want to get your head around the issue – where do you start? What guidelines and frameworks are there out there?

This is where things have a tendency to get bogged down in technicalities, jargon and little-heard (pun intended) standards and certifications. It’s also where people in white coats pop up and talk about hertz and reverberation. It all gets a little too scientific for everybody. 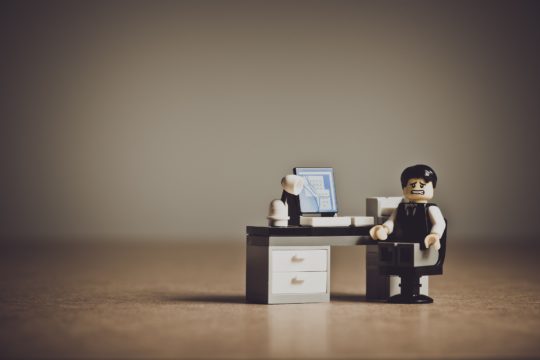 It shouldn’t require a post-doctorate to understand acoustics and the associated standards and frameworks, as we’re about to explain.

Decibel (dB): The internationally recognised unit of measurement for sound levels. The decibel scale increases logarithmically. This means 20 dB is ten times that of 10 dB and 30 dB is one-hundred times louder than 10 dB.

Reverberation Time: The time it takes for a 60-dB sound to fade away within an enclosed space. The higher the time, the more prevalent an echo will be. The lower the time, the better.

Noise Reduction Coefficient (NRC): A scalable representation of the amount of sound energy that is absorbed when it strikes a particular surface. An especially useful classification to use in acoustic design.

The Standards You Need to Know

There are various different regulations and standards that cover acoustics in non-residential buildings.

Strangely, there isn’t one that relates to offices (yet). But there are a couple of relevant references that those managing and designing workspaces should pay attention to.

BS 8233 defines what is considered to be an acceptable limit for sound in and around buildings. It’s specifically aimed at architects and developers. However, for those designing office spaces, it’s an incredibly useful source of reference.

Appendix 15.2 recommends that average internal noise levels (factoring in external disruptors) should be between 35-40 dB. This is based on advice issued by the World Health Organisation (WHO). Though, crucially, it doesn’t account for sound created within the space.

However, it’s worth keeping those figures in mind. If 35-40 dB is the base limit, at what point will an occupied space start to become too loud?

Typically referred to as BB93, this document sets out the minimum standards for acoustics within schools and helps to showcase compliance with building regulations.

Recommended sound levels range from between 30-55 dB. This depends on the space in question (swimming pools and gyms have a higher upper limit than study rooms) and whether the school is a new build or is undergoing a fitout.

Again, while not explicitly applicable to offices, BB93 contains useful advice and is a great reference source to use. After all, if we expect a school’s breakout zone to be no louder than 45 dB, shouldn’t we expect the same for a similar space inhabited by adults?

BB93 also discusses reverberation times, which brings us nicely onto…. 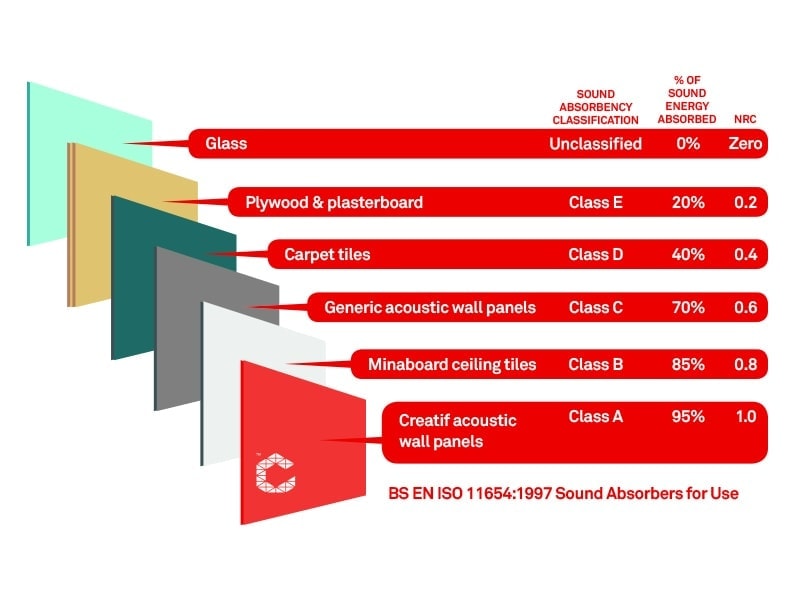 This international standard concerns the rating of sound absorbers for use within buildings. It is one of the most important guidelines to refer to in the world of acoustics.

ISO 11654 specifies a process from which surfaces and materials can be given a frequency-dependent value that can be converted to produce its NRC**.

In layman’s terms, this gives us a really useful reference tool to compare sound absorbency.

Glass, for example, is unclassified and has an NRC of 0 because it reflects sound waves. And it’s a similar story for plywood, plasterboard (both Class E, 0.2) and other similarly hard surfaces.

At the other end of the spectrum, specialist acoustic wall panels (such as ReSound) is designated as a Class A absorber. It comes with a whopping great NRC rating of 1.0.

It’s easy to deliver acoustic comfort if you know what you’re working towards.

By introducing a Class A absorber into a space you can make a huge difference. It’s always better to build in acoustic design rather than retrospectively add it. But quite how that looks like and how it’s implemented…well, that’s up to you! With a whole host of acoustic solutions and products available, the only limit will be your imagination (and a tiny bit of science).

** Just to confuse things, the NRC is not the same as the Sound Transmission Class (STC). This is a similar but ultimately different measurement. STC is concerned with how well materials stop sound energy (as opposed to absorbing it) and is more commonly used in North America.